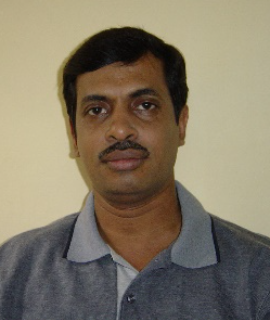 In recent years, Giant Magnetoresistive (GMR) technology became prominent in the field of magnetic sensing. One of the important applications of magnetic field sensors developed using GMR technology is detection and measurement of current. The current sensors are vital elements in the field of power electronics used for control and monitoring applications. Recently, development of the Hybrid Electrical Vehicles and Electrical Vehicles have upraised the demands of open loop current sensors. In this regard, the development of the current sensor was carried out using GMR technology.

In the present work, we study the CoFe/Cu magnetic multilayer thin film structure of nano-meter thicknesses for its use in magnetic sensor. The fabrication of multilayer thin films was carried out using Ultra High Vacuum (UHV) sputtering technique. The multilayer structure was optimized for GMR properties on 4-inch wafer with low hysteresis and nonlinearity. The magnetic sensors were micro-fabricated using fabricated multilayer thin film structure. We study the application of the GMR sensor in open loop intrusive and non-intrusive current sensing. The current sensor prototypes were designed and developed as per industrial and aerospace standards. Fabricated current sensor were studied for AC/DC and thermal properties. Further the sensors were evaluated for aerospace and industrial applications addressing real time problems.

What will audience learn from your presentation

Dr. Prasanta Chowdhury graduated in physics at the University of Burdwan in 1992 and completed his post-graduation from the University of Burdwan in 1995. He obtained his doctorate in physics from the Indian Institute of Technology, Bombay in 2000. He worked in South Korea as a post-doctorate fellow. Presently he is working as a scientist at National Aerospace Laboratories, India. His current activities include the development of magnetic sensors for automotive applications, polymer-based actuators for application in aerospace and biomedical. He is an author of over 70 international journal publications.